Unlike Tom Cruise, who has been very public about the problems he faced after filming the latest Mission Impossible movie with a broken ankle, Nicolas Cage has a very different story to tell. 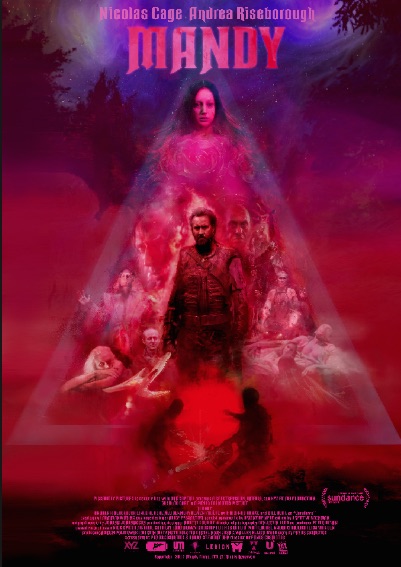 Apparently, Nick broke his ankle just before filming began on Mandy, a crazy revenge-thriller due out September 14. According to the star, “I was coming off a broken ankle. I didn’t want to lose the movie, but while doing all those fight scenes, and preparing for it, I was still kind of going through rehabilitation on my leg. Oddly enough, the stunt work actually helped with my recovery, because it got me using those muscles again, and got me functioning again, whereas I’d been in a wheelchair for three months.”

If this sounds odd to you, as it does to me, Mr. Cage delved a little deeper into his explanation: “Well, it doesn’t seem like something that would actually help, but oddly enough it did. It forced me to get moving again and at a very fast pace. I had to get up to speed with those fight sequences, and with very little time, and there was no margin for error. So yeah, I would say it did help, and maybe there’s a version of the world where doing stunt-fighting, and sword-fight work, or whatever it is, for movies, that kind of training, and those kind of skills, could be good for rehabilitation.”

Hmm…maybe so, but I’ll still stick to my proscribed method of rehabbing a broken ankle: immobilization, rest and, ultimately, physician-monitored rehabilitation. I’ll leave the crazy-killer fight scene rehab to the Nicolas Cages and Tom Cruises of this universe!