Little Girls in High Heels: It's a Really Bad Idea

Recently, I came across an old blog entry on the Huffington Post by Michelle Cove, an author and mother of a young girl. The title of the post was, “Putting My Foot Down on Girl High Heels;” as a father of a teen girl and as a Houston podiatrist, the entry quickly caught my attention. 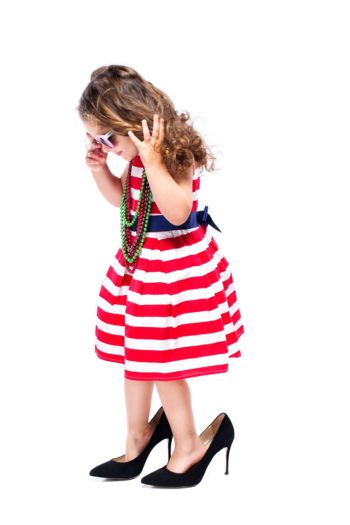 Cove was ranting about little girls wearing high heels after seeing celebrity children wearing wedge-heels to match their mamas'. In her blog post, Cove addressed in passing the problems that could be caused when young feet are squished into high heels, but her main point was that little girls should be children; if you aren’t comfortable seeing your eight year old in a crop top, then you shouldn’t feel so great about her wearing heels, either. Both are more appropriate for women than for girls, Cove believes.

As a dad, I’ve wisely learned to leave most of my daughter’s clothing decisions to my more-than-capable wife. But as a podiatrist, I could not let Ms. Cove address the health problems associated with kids wearing high heels in just one sentence, so I’ll expand a bit on the issues she brought up.

Since kid’s feet are still growing and developing, they are more susceptible to conditions like hammer toes, a condition in which toes become painfully and unnaturally bent. I often see this condition in mature women who frequently wear pointy-toed shoes that pinch the feet and place dangerous pressure on the feet. When still-developing feet are exposed to that kind of pressure, they are that much more at risk of developing this problem.

Wearing high heels can also leave little girls more susceptible to stress fractures; wearing these shoes causes the center of gravity to shift forward, increasing pressure on the front of the foot. Over time, this pressure can cause the bone to fracture, especially in young, less developed feet.

Wearing a high heel at such a young age can also cause a shortening of the Achilles tendon.  This can happen in adults too, but is much more likely in kids.  If this happens, there will be undue stress on the back of the heel, where the tendon attaches, and it can quickly become a painful condition known as Sever's disease, or calcaneal apophysitis.  It is an inflammation of the growth plate on the back of the heel bone causing sharp heel pain.  As she grows older, the shortened tendon will lead to compensation of the rest of the foot, causing the foot to become unstable and pronate.  This will put her at risk for developing bunions and hammertoes in the future.

Besides these concerns, and a host of other problems, putting little girls in high heels is a bad idea because it won’t give them the support they need to run around and play. Clearly, your balance isn’t as good in heels as in more supportive shoes, meaning children who want to play while wearing heels are more likely to twist or sprain their ankles.

Regardless of your emotional feelings about young girls wearing high heels, I think we can all agree that it is not the best choice of footwear to support developing foot growth. If at any time you have concerns about your child’s foot health, contact my Tanglewood Foot Specialists office to schedule an appointment for your daughter or son.