Will Joe Biden Wear a Boot to the Inauguration?

President-elect Joe Biden has been working hard to set up his government during this transition time. He holds daily briefings and countless hours of meetings each day. While that leaves little time for personal enjoyment, he did find some time to steal away and play with his dog, Major. Unfortunately, it seems as if Biden twisted his ankle and injured his foot while playing with Major.

Reports have shown that an initial x-ray didn't show any injury. After a CT scan, however, hairline fractures were noticed in his middle and lateral cuneiform bones. These are bones in the midfoot, right before the metatarsal bones. He will likely be in a fracture boot for the next six to eight weeks. This brings him right through the inauguration on January 20, 2021.

What is a Hairline Fracture?

What are Cuneiform Bones? 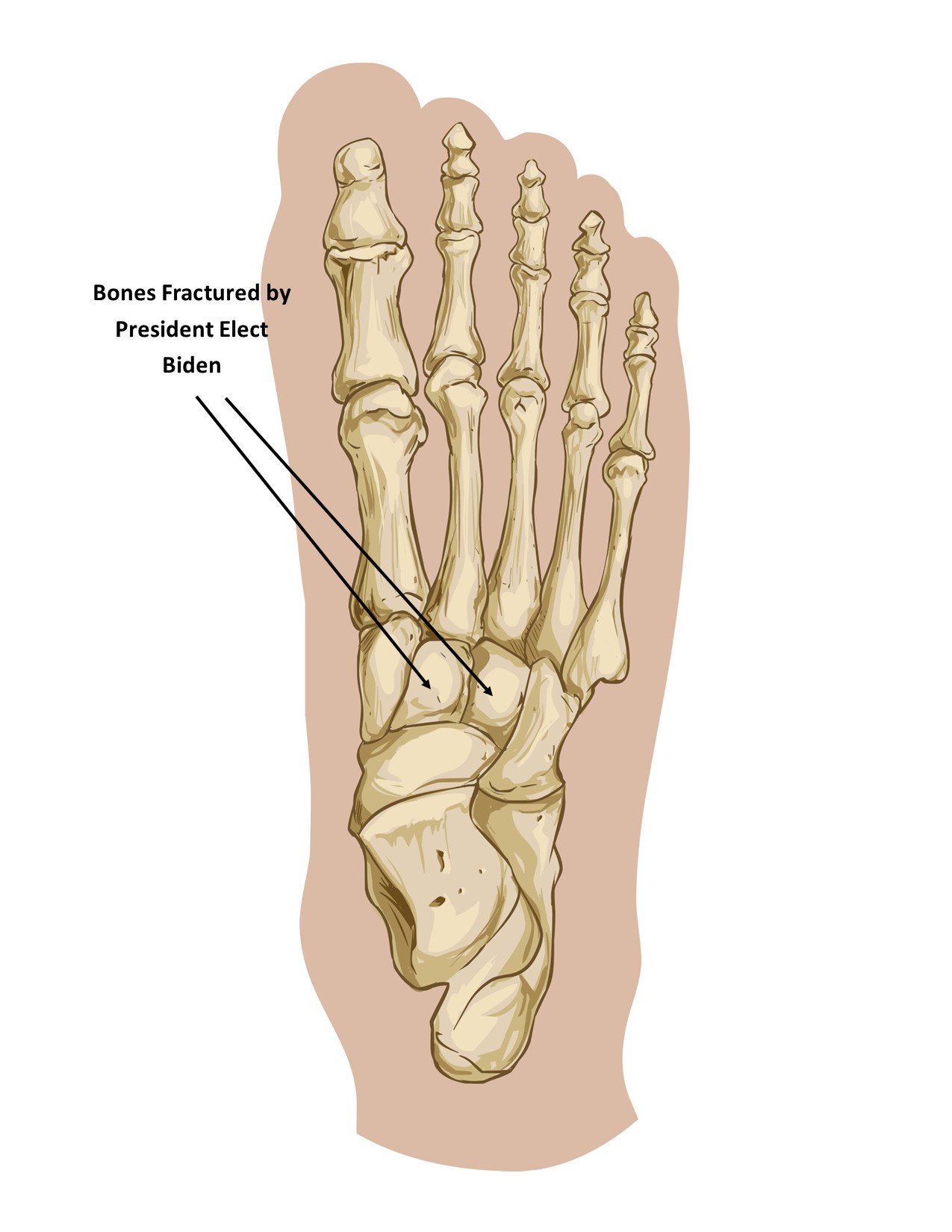 The cuneiform bones are not commonly known. They are a series of bones in the midfoot known as the tarsal bones. According to CNN, President-elect Biden fractured the middle and lateral cuneiform bones, as indicated on the image to the left. These are the bones directly prior to the 2nd and 3rd metatarsal bones. They are bones that are irregular in shape. They serve an important role in the transfer of pressure while walking. If they were not in good position, Biden could develop arthritis that can cause peristant pain.

How Did the Cuneiforms Become Fractured if Biden Twisted His Ankle?

Each foot has 26 bones that have to support your weight and activity. Whether you're going for a walk or hiking up a mountain, your feet need to get you there. All the bones work together to provide both stability and mobility. It's a pretty tough ask, but both feet come through usually.

The injury likely happened while Biden's foot was planted and then he twisted when he twisted his ankle. This motion put extra pressure on his midfoot and caused the bones to fracture. It could have been worse, however. For one, he could have suffered a Lisfranc injury among the entire row of tarsal bones. He also could have suffered a Jones fracture of the 5th metatarsal. Both of these injuries often require surgery to repair the injury.

What is the Recovery Time for Hairline Fractures of the Cuneiform Bones?

Based on the information available in the news media, Biden suffered a minor, non-displaced fracture. These fractures should clinically heal in 6-8 weeks with a return to physical activity in about 12 weeks. During those 6-8 weeks, President-elect Biden will wear a fracture boot. The boot is a way to immobilize the foot while still allowing him to bear weight. The boot redistributes the pressure and helps move the foot from heel to toe with a rocker sole.

Because of Biden's advanced age, he may also use a bone stimulator. A bone stimulator is an external device that sends electomagnetic impulses into the bone to allow the bones to heal quickly and strongly. While most only use bone stimulators for fractures that are stalled and not progressing towards healing, I have a feeling that they'll be able to get one for the President-elect.

While technically Biden should still be in the fracture boot for the inauguration, I have a feeling that he'll just be wearning his shoes that day. It will be hard to dance with the First Lady at the inaugural balls with a clunky boot on.

President-elect Biden's fracture is not uncommon. It's not even because of his age. He just stepped and twisted the wrong way, which led to a broken foot. I've had similar situations in my Houston podiatry office. A simple kick of a soccer ball led one patient to have a very similar fracture. If you develop pain and swelling of your midfoot, don't hesitate to contact us to have it checked out. We'll be happy to schedule you for an immediate appointment.