Adult and youth hockey are now year-round sports. And they're popular here in houston, even without an NHL team of our own. Now, this sport has a reputation for injuries. After all, what other sport officially enlists team members as enforcers?

Still, when you think of hockey injuries, broken bones and knocked-out teeth come to mind. And those do come up. But actually, one of the most common ice hockey injuries is the Haglund’s deformity. It's a type of bone spur I'll discuss in a minute. But first, let's talk about why bone spurs form in the first place.

What is a bone spur?

A bone spur is bone that grew where it shouldn't. Also called an osteophyte, the growth happens when your body tries to protect itself. Most often, it's defending against pressure. That's why pressure, and bone spurs, can form anywhere.  But they show up a lot on your feet. Because of the pressure put on your feet, every day.

You'll often notice a hard bump forms on your foot. That bump is a sign that bone grew and changed shape to make up for lost cartilage. (Remember, that cartilage wore down because of pressure.)

On its own, the bony bump isn't a problem. But, when bones spurs grow, they can irritate the surrounding areas of your foot. And that irriation may cause pain and inflammation. That's especially true when bone spurs form on areas like your heel, when we call them Haglund's deformity.  Because it's hard to keep pressure away when you put on shoes. Or, even worse, when you wear hockey skates.

What is a Haglund's deformity?

A Haglund's deformity is a bony bump that forms on the back of the heel at the base of the Achilles tendon. It is a type of bone spur, named for where it grows.

Like other bone spurs, a haglund's deformity makes trouble as it grows larger. When that happens, Achilles tendinitis  may develop. Then, as it rubs against the backs of your shoes, you may notice painful bursitis. ( That's inflammation in your fluid-filled bursa sac, located between tendons and bones.) Given all these risks, treating a Haglund's deformity can save you from years of pain. Particularly if  you hope to keep playing hockey.

Why do hockey players get bony heel bumps?

Hockey players are at particular risk for developing this type of bone spur. Why? Because the rigid-backed hockey skates put tpns of pressure on your heels. And bone spurs form in response to pressure.

So, that's the bad news. Playing the sport you love could hurt your feet. (And your teeth and head, too. But that's not my area of concern. That's between you, your other doctors, and your mom.)

Still, on my end, I'm here to tell you. Playing hockey doesn't have to destroy your feet. There are ways to prevent Haglund's deformity. Just follow my cue and you can keep bony bumps at bay. (Or at least  stop small bone spurs from growing.) 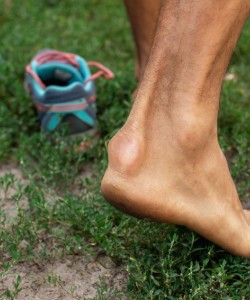 Because hockey skates can cause Haglund's deformity, that's the first place to intervene to stop a bone spur. First, get your skates fitted by a pro. When the hard skates fit right, they're less likely to slam into your heels. Then, you can also pad inside your skates. Because, that way, you can take a lot of pressure off your heels. So you'll lower your risk for bone spurs.

Now, what if you already have a spur at the base of your Achilles? That doesn't mean you'll develop other painful problems. But it does mean you have to now be extra cautious. Before any skating session or workout, take extra time to first stretch out your tendon. That's non-negotiable. Because the bone spur is placing plenty of pressure on your tendon already. So you should do whatever you can to remove any extra stressors to the area.

In doing that, we may keep your Haglund's deformity from growing. That way, you can avoid future complications. Or more invasive treatment measures, such as surgery.

Lucky for you hockey fans, we can usually manage bone spurs  with conservative, non-invasive treatments. That includes padding and stretching, like I just mentioned. But I can also suggest icing or oral anti-inflammatories, to help reduce any pain. Finally, I may suggest special hockey orthotics. These custom medical devices can change the way your foot sits in your skate. So that pressure stops building. And your Haglund's deformity stops growing.

Of course, conservative treatments work better with a small problem. Or a small bone spur. But if you wait too long, the only way to relieve your bone spur pain may be surgery. So don't wait until the fourth period to see me about your bone spur. Instead, let's get to the face-off right now and start treating your problem. By making an appointment today with your Houston hockey podiatrist!