Free Resource: All About Custom Orthotics
To Request an appointment with Dr. Schneider 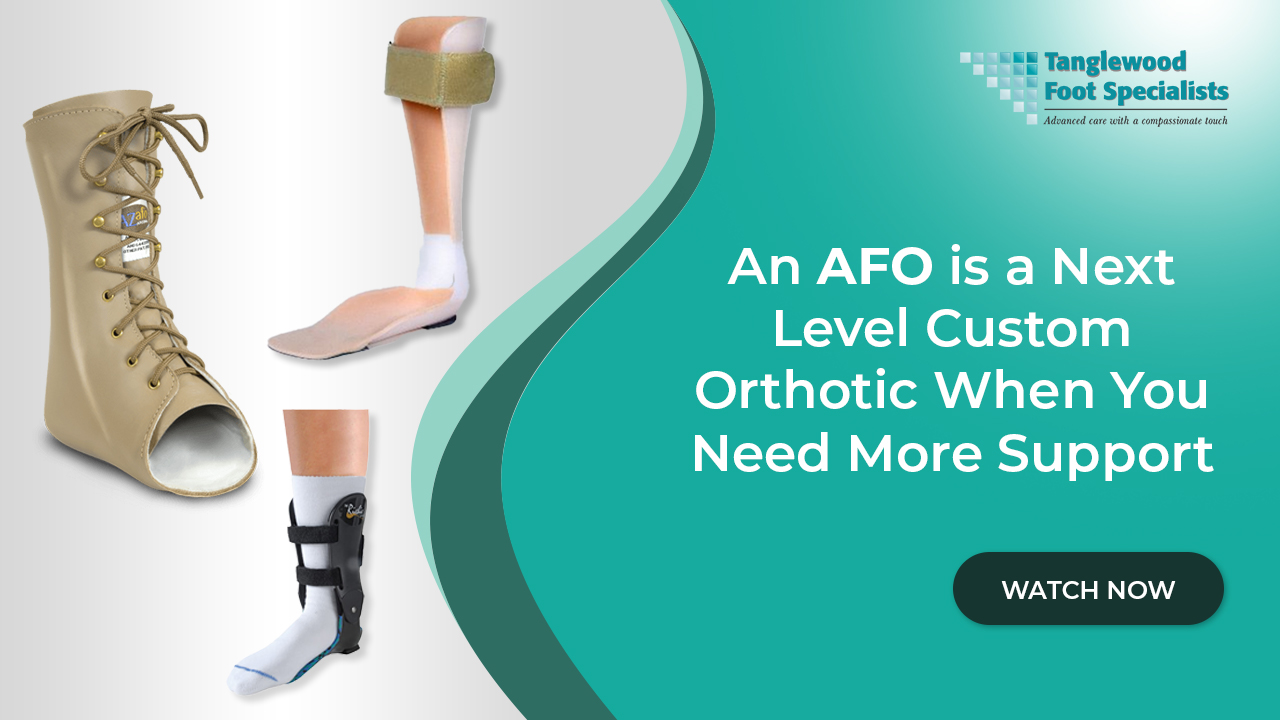 You may have been told at one point or another, that custom orthotics just don't work. You may have a friend who used one and it didn't help them. My name is Dr. Andrew Schneider, and I'm a podiatrist in Houston, Texas. This situation can occur for one of two reasons either, or the orthotic was poorly made and didn't provide enough support or the foot and ankle required more support than an orthotic is able to provide. In today's video, I'm going to discuss an ankle foot orthotic or AFO, which is used when more support is needed than a traditional custom foot orthotic can provide.

There are times when a custom orthotic does not provide enough support. This usually occurs when there's a particular weakness in the tendons. This causes the foot to pronate abnormally and excessively to the point where a custom orthotic under the foot is not effective. We call this "pronating off the orthotic." I can usually predict when this will happen. Sometimes I don't know until we try a custom foot orthotic.

When I see someone who I think a custom orthotic will not be effective enough, I recommend another type of orthotic that extends above the ankle. It's called an Ankle Foot Orthotic or AFO. Because an AFO extends control above the ankle joint, it is more leverage to control the foot. This effectively solves the problem of someone pronating off the orthotic device.

There are several types of AFOs. They all function to correct the position and motion of the foot and ankle. They also compensate for lower extremity weakness. That said, there are different styles of AFOs for different conditions. AFOs are not a one device fits all situation. The device needs to be evaluated and properly chosen for each patient.

In the past, when an AFO was discussed, we would be talking about a solid plastic device that extends from the foot, up the back of the leg, to just below the knee. These were difficult to wear, reasonably uncomfortable, heavy, and hot. Although there are still times where an AFO like this is a good choice, there are newer devices that are easier to wear and much more comfortable. Today I'm going to discuss the most common types of AFOs.

An articulated AFO is the next step up from a custom foot orthotic. It is a custom foot orthotic with a hinge joint at the level of the ankle and upright supports on either side of the leg. An articulated AFO allows for a full range of motion at the ankle, but controls the side to side and rocking motion of the heel. This prevents the foot from collapsing and over pronating. It also controls the rotation of the tibia. The articulated AFO is a perfect choice for someone who has a poorly functioning posterior tibial tendon. It's also good for someone who excessively sprains their ankle.

They usually are able to fit well in shoes, particularly athletic shoes, and they're designed to be used with activity. So they're not gonna limit your ability to walk a run. In fact, they'll make you feel more stable when you do.

There are variations of the articulated AFO, where the ankles joint is not unrestricted. In cases where someone has a partial foot drop, I'm able to put spring hinges in the ankle, which assists the patients to flex their foot up and clear the ground. This way they're not tripping over their feet.

The other common type of AFO is a gauntlet AFO. This device envelops the foot and ankle, and fixes it in position. This is a device that's useful when there's extreme weakness and over pronation that will cause the foot to require maximum support. It's also a perfect device for someone who's suffering from osteoarthritis or degenerative joint disease of the rearfoot or ankle. This can be treated surgically, but it carries with it a four to six month recovery. The reason the Gauntlet AFO is so effective in cases of severe arthritis is because it prevents motion of the arthritic bones that are causing you pain. By reducing the motion, it's going to reduce your pain level by approximately 90%.

Using an AFO, I've helped patients bridge the gap between the point they know they need corrective surgery to the point where they're able to
take the time to get the surgery. Some patients have even opted out of their surgery entirely, since they were so satisfied with the pain relief provided by the AFO.