How to Heal a Hairline Fracture and Other Running Injuries

When you’re a runner, training for your next big race takes on its own life. I know, I’ve been there. A few years ago, I was training for the Avengers half-marathon down in Disney. And nothing would have stopped me from picking up my number and logging those 13.1 miles. All while running as fast as I could possibly go.

This doesn't make me unique, as much as I'd like to think it does. After all, runners are known for our obsessive dedication to the sport. So much so, in fact, that scientists study runner's addiction. Don't believe me? Check out the facts from a study in the International Journal of Environmental Research and Public Health. It found that "obsessively passionate" runners are more likely to get hurt from the sport.

Now, that information may not be shocking, but here's what is. Younger runners, especially those between the ages of 20-34, had a hard time "mentally detaching" from training. And that need to run got in the way of important life decisions. It also kept injured runners from taking a much needed recovery break. "Even when running became harmful." Now, that's a problem. Especially when running injuries are in that hard-to-diagnose grey area of pain. 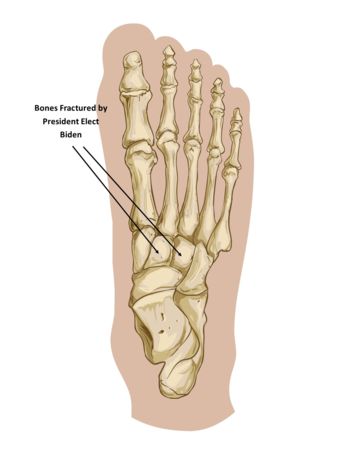 As I just said, some running injuries are hard to detect and treat. Take the hairline fracture. Recently, President Joe Biden made headlines for this injury. He sustained hairline fractures on his lateral and intermediate cuneiform bones. (I even talked about this injury in a feature on Verywell Health. So exciting!)

Now, what's interesting about this fracture? (Aside from earning me some time in the national spot light?) Well, if you watched this story carefully, you'd know that doctors almost the President's fractures.) They didn't show up on his first x-rays. And were only spotted after a careful clinical exam that encouraged further tests. (P.s. this is why you should see a podiatrist if you think you broke a foot bone. We're more likely to find the injury!)

Luckily, President Biden's doctors found his fracture. And, thanks to proper foot fracture treatment, he recovered fully. (This included rest, immobilization and physical therapy.) But now let's imagine he was just your average Joe. (Get it?) Chances are, his fractures could have gone undiagnosed. So, that average patient could have kept running. Either after his dogs or in search of his weekly miles. Either way, running on a hairline fracture would have compromised recovery. Yet I'm guessing lots of runners would push through their pain and do just that. Because that's what runners do.

Of course, I'm not here to judge. Because, like I said at the beginning of all this: I understand the drive to run. I get working towards a goal, like a race, and wanting to push through, no matter what you're body is saying. So, back in my running hey-day, I might have been right there with my fellow obsessed runners. Except, of course, that as a podiatrist, I would have been bound to sit out the big day if I noticed any one of these blatant runners’ red flags.

How Can You Tell if you’re too Injured to Run a Race?

If you think you’ve got a running injury, and you’re training for a big race, the first thing you need to do is go and see your podiatrist. ASAP. Now, I can’t make any promises. And a lot will depend upon how much time is left before race day. But I may be able to get you into good enough shape that you can compete without making your injury worse, or putting your long-term health at risk.

Having said that, if your race is in the next day or two, and you’re playing a game of mental ping-pong, going back and forth about competing, these are the questions you need to answer honestly.

Unfortunately, if you answered yes to any of these questions, you really need to sit out your upcoming race. If you don’t, you’re risking a worse injury. And a future that may well exclude running for an extended period of time. But let’s say you can honestly answer no to all of the above. Now, we have to assess your pain levels to see if running could be dangerous.

How much pain is too much to run through? 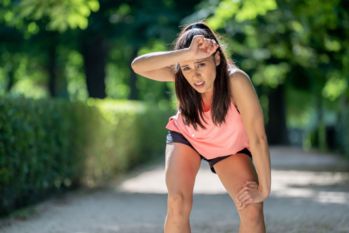 Runners are famous for pushing past the discomfort at mile 10 to cross the finish line. But, if you suspect a running injury, you need to honestly ask yourself: on a scale of 1-10, how bad is your pain level?

If you’re at or below a 2, go ahead and run your race. Your time may be slower, and you’re definitely going to struggle at certain points, but you’re unlikely to do any damage.

If you’re a 3-5, it’s crucial to get your injury examined before deciding to take part in the race. And, if you’re above a 5 on the pain scale, I hope you won’t need a podiatrist to make this clear: you’re in too much pain (and too injured) to run a race.

Of course, there is one small asterisk to that pain-threshold guideline: if there is any chance your injury has caused bone damage (something fell on your foot, you stubbed your toe hard enough to see stars, etc.) don’t run before you get an x-ray. Sometimes, pain levels may be low even if you have a hairline fracture. But if you run on that fracture, your pain level—and recovery time—are likely to soar.

If you are noticing that you're starting to get pain when you run, don't wait! Contact Houston podiatrist Dr. Andrew Schneider. We'll get you in for an immediate appointment and keep you running!