Your Plantar's Wart Should NOT Be Getting Worse! 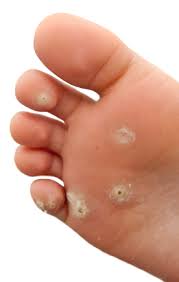 Plantar warts are one of those frustrating foot developments. Some people get them all the time, others never get one. Warts are a manifestation of Human Papilloma Virus. This form leads to plantar warts, those sometimes painful lesions on your feet. There are many home remedies, as well as plenty of pharmacy shelf space, devoted to them. They end up being very stubborn, however, and most people find themselves in my Houston podiatry practice for treatment. Often after months of unsuccessful attempts at self-treatment. In order to save you all the time and frustration, let's take a closer look at how successful wart treatment evolves.

What if a Plantar Wart isn't Responding to Treatment?

Typically with treatment, the warts should improve. Sometimes they require multiple treatments to be fully resolved. Sometimes, they are resolved after one treatment. One thing is for sure, though. No matter how warts are treated, they should show signs of improvement. That means we expect the wart to become progressively smaller. If treatment causes the wart to grow larger, we have to wonder why.

I once saw a patient who was referred to me after being treated by a couple of other doctors in Houston. A variety of methods were used to treat the wart, including topical medications and laser therapy. After treatment, the wart became larger...much larger....and much more painful. The wart was clearly getting worse!

When I saw him in the office, I could barely touch the area around the wart. In fact, I was unsure it was a wart at all. It had some of the properties--but not all. I have a strict protocol for treating warts. I want to treat them before they spread and multiply. But I can't do that it if I'm unsure of whether it is even a wart or not! The best way to know what I am dealing with is by taking a biopsy.

A biopsy is a simple in-office procedure where a very small "punch" is taken from the lesion to be sent to the lab for evaluation. Looking at the lesion microscopically will definitively tell us if there is a wart or not. Don't worry, I numb the area first and you don't even need a stitch afterwards! If the report comes back that it is indeed a wart, great! We'll treat it as such. If not, we know what we are dealing with and tailor the treatment appropriately. That's the care I provided for this patient, and that is the promise I can make to you!

It will respond to care. If you are dealing with at home, that response may be slow and painful. In my office, it will likely be faster, virtually painless, and more importantly, targeted to the actual issue that's manisfesting on your feet!

If you have a wart, or something that you think is a wart, and it just isn't improving, contact Houston podiatrist Dr. Andrew Schneider. We'll get to the bottom of the situation and make sure you are on the right track!