Insoles and Orthotics for Runners: The Good, The Bad, and The Ineffective

Free Resource: All About Running Injuries

Request an appointment with Dr. Schneider 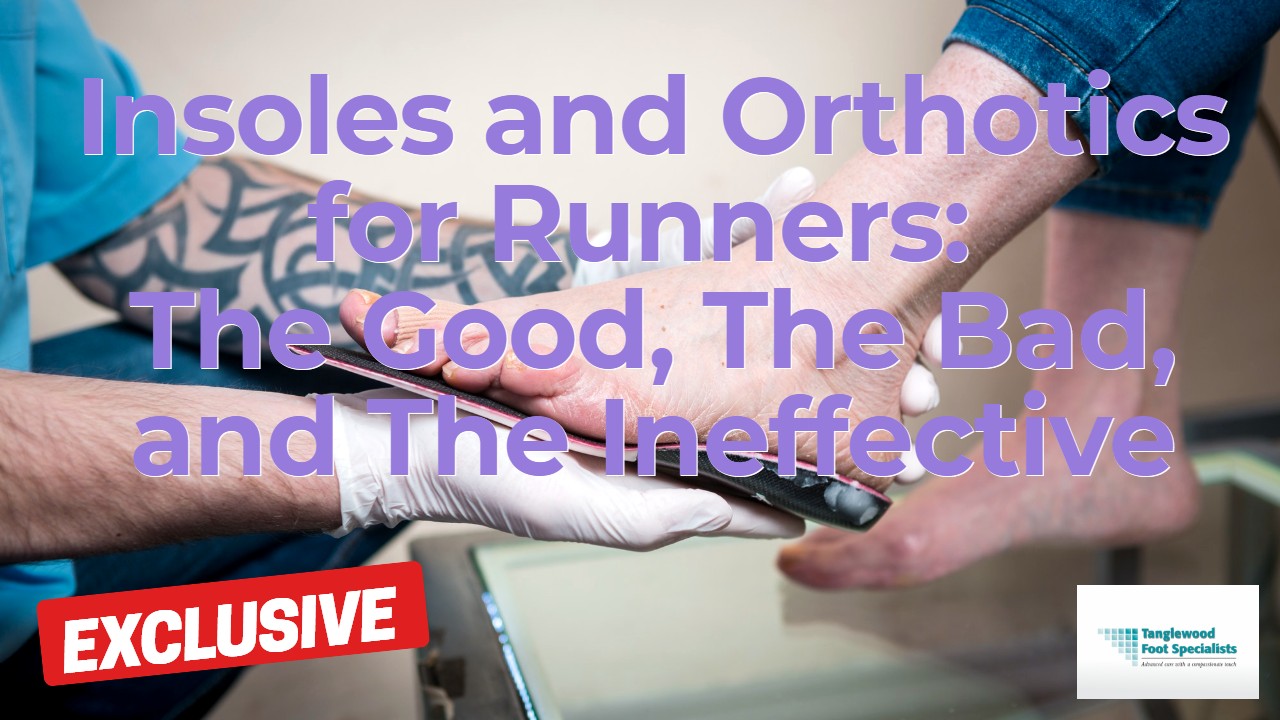 Running is one of the most accessible sports and forms of exercise. You just need to lace up your shoes, step out your front door and go. Not everyone is built to run without some additional support and assistance. Even with the best running shoes, you may need more to help you achieve your goals. That's where insoles and custom orthotics come in. My name is Dr. Andrew Schneider, and I'm a podiatrist in Houston, Texas. In my practice, I work with many runners of all levels and abilities from someone training for their first 5K to the seasoned ultra marathoner. In today's video, I'll discuss the use of insoles and custom orthotics by runners.

When we talk about insoles and orthotics, I'm going to be referring to three different things: Store-bought insoles, medical grade insoles, and custom foot orthotics. When it comes to store-bought insoles, they run the gamut. You can find the floppy pair of insoles that will truly do nothing for you. And you can go to a specialty store and spend a thousand dollars. I don't recommend that you spend that kind of money for something that's off the shelf, but people do it every day. When people think of off the shelf insoles, however, they usually think of Dr. Scholl's, whether they're the insoles in the foot care aisle or the pharmacy or the ones that are recommended when you stand on the scanner in the store, they simply don't provide enough support to be effective. That's the problem with most of the off the shelf insoles, they're usually made a foam and fold in half with little effort.

The next category of insoles are medical grade. Most of the time, these are available in a podiatrist office, but there are some that are available online or off the shelf. These insoles are not just foam. They have a plastic support that helps to support the arch. I dispense these insoles when they're appropriate to people who need more arch support. There are times when a medical grade insole is all you need. Other times, they're a stepping stone before a custom orthotic. In no case should a medical grade insole costs more than $80. If you're in a store where they're trying to sell you an insole without taking an impression of any sort, please use that rule of thumb. There are stores like the Good Feet Store who will try to sell you insoles, good insoles, but still off the shelf, for hundreds of dollars. Instead, look for brands like Powerstep, Superfeet, or Spenco. In my office, we use medical grade insoles called RediThotics with excellent results. I generally only recommend an off the shelf insole for people who have a flat foot. While there are medical grade insoles for people with high arched feet, They're not as readily available.

And that's where custom orthotics come in. I'd like to say that all custom orthotics are equal, but that's far from the truth. There are different philosophies as to the science behind the custom orthotic, the method of taking a mold, whether they should be hard or soft, or even if they're better than an off the shelf insole at all. That's a good place to start. What's a difference between an insole and a custom orthotic. Well, an insole is purely supportive. It's there to buttress up the arch and it offers this the same support to anyone who wears it. A custom orthotic is corrective. When I evaluate you for a custom orthotic, I take a series of measurements called a biomechanical examination. That allows me to understand how your foot and ankle are functioning. I then watch you walk so I can analyze your gait. You can't believe what I can see simply by watching you walk. The information is invaluable.

Most importantly, I take the information from the biomechanical exam and the gait analysis, and I formulate a prescription on how to make the custom orthotic. My goal is for the orthotics to make your feet work as stable and as efficiently as possible. Think about it like eyeglasses. You can get the reading glasses from the rack at the pharmacy, but they'll help magnify the words when you're reading. Or you can get custom lenses, which correct your all around vision, so you don't have to squint or strain your eyes. Similarly, a custom orthotic will allow your foot to work as efficiently as possible. Since the orthotic handles the correction, the mechanics of your foot will be as stable as possible when you are wearing them.

A common controversy, even between practitioners, is whether an orthotic should be hard or soft. Here's the thing. Feet crave consistency. Think about going for a run on the sand at the beach. It's much harder than running on a solid surface, like a road. That's because you need to work harder to propel yourself forward while the sand is loose under your feet. The same thing applies to an orthotic that is too soft or flexible. It will deform as your foot moves. And while it gives you some stability, your feet ultimately will work harder in a soft orthotic. A firm custom orthotic will provide your feet with stability and efficiency that they need because they're made from a mold of your foot. You shouldn't feel like an orthotic is too hard, but rather feel the cushioning of your shoe. Also, using a firmer material will mean that I need to use less of it to achieve the stability that you need. That will allow you to wear your custom orthotic in your current shoes, without the need to go to a larger size or a wider shoe.

Another difference in orthotic construction is the best way to take a mold for a custom orthotic. The methods vary. Some people step into foam box. Others stand on a digital scanner. Still others have their feet scanned when they're in the treatment chair. The problem with many of these methods is that you're capturing the foot in an unstable position. That's why I stay old school. I take a mold of your feet using plaster splints and hold your foot in what is the most stable position. To me, this method leads to the most effective custom orthotics. These orthotics will work for you, whether you have a flat foot, a high arched foot, or anything in between. That's because of the measurements I take. Each orthotic will be made specifically for each foot. In fact, it's rare that one foot has the exact same prescription as the other foot.

Finally, there's always a question as to whether a custom orthotic can be worn in sandals. Now, some sandals are made with a removable foot bed. In those cases, we remove the foot bed and replace it with a custom orthotic. If the foot bed isn't removable, I have had many patients who use a workaround by securing the orthotic to the sandal with Velcro or double stick tape. Whatever works.